32 wild turkeys were released on Ann and Colin Hunter’s farm today. Big thank-you to Bruno Bruederlin, long-time active member, and Director of the Manitoba Wildlife Federation, for trapping, loading, and releasing the birds, as well as to Wildlife biologist Allison Krause-Danielson who banded them. The release was coordinated by Wild Globblers Unlimited of the MWF. A writeup of the release can be found in the Farmers’ Advocate (check out page 24). 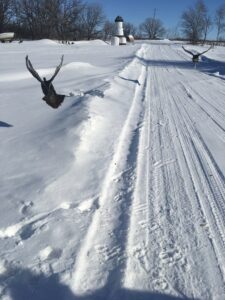 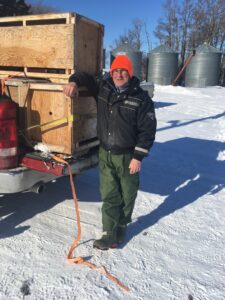 37 wild turkeys were released on Jason Lamb and Rhonda Foote’s land this morning. Big thank you to Lee Robins and Brian Brownlee for packing up the birds for transport this morning. Apparently it wasn’t an easy task under covid restrictions. Thank you to Allison Krause Danielsen from Wildlife Branch for approving the club’s request. See the video here.

There is a lot of work involved from many parties to make a turkey hunting season a success.  Involvement with the Manitoba Government, local Game and Fish organizations, Manitoba Wildlife Federation, Wild Gobblers, and students from the Land and Water Management Program at Assiniboine Community College stock areas with wild turkeys.  This helps create a breeding population which supports sustainable hunting.

This year, Rivers Game and Fish member Terra Wolski managed to tag her first ever wild turkey!  It was a grueling battle between woman and bird.  Arrows were flying, adrenaline was pumping, victory was achieved!

It all started two years ago when Melissa Lindsey invited Terra to a Southwest Strutters Fundraiser in 2017.  Two Avian X turkey decoys were won and that was the seed that was planted.  For the next two years after that Melissa took her out hunting.  For two years the elusive turkeys left Terra without a shot with a bow.  Many will use a shotgun for taking down birds but it meant a lot to Terra to take down one with a bow due to the investment of time, equipment, and the thrill of having to achieve a more difficult shot.  A lot of information between the two ladies was shared and many practice shots were taken.  With the development of Covid-19 and the social distancing practices in place turkey hunt round three had to take place alone.  With husband Evan Wolski (myself writing this article) in tow scouting began.

A potential area to hunt was established.  Next was gaining the land owners permission.   Once that was in place setup began.  The day of setting up the blind was pretty decent, warm sun and temperatures.  Saturday morning, the day of the hunt was not so pleasurable.  With alarm clocks set for 3:30 am and a few snooze buttons later everyone was up and about.  Quick stop at the good old breakfast drive through and off to the hunt.  Set up decoys, spread out equipment, all set to go by 5:15 am.  Around 5:45 the gobbles began.  We could hear other turkey rafters in the distance responding.  This lasted for about 45 minutes then dead silence.    Temperatures that morning were only +4 with the feels like +1.  We stuck it out till about 9:30 am then decided we needed a warm up.  Being closer to home we quickly headed home to change into some warmer gear.  Being new to the area we didn’t know the turkey’s routine and hoped we didn’t miss our chance while putting on warmer clothing.  Lesson learnt for next time.  Returning around 10:30 am we realized that the turkeys were just on the other side of the tree line from us.  One by one they slowly poked through the trees and started feeding in the area we were set up on.  At a distance of 75 yards away it was hard to watch them slowly work their way away from us.  Luck upon us two males started making their way towards us feeding.  When they got about half the distance to us, they seemed to then notice the decoys.  Well, all heck broke loose after that.  They ran toward the decoys, the others noticed and they all started running.   Soon our decoy was taking the beating of its life by about 5 males fanning and pounding against the decoy.   A quick shot from 20 yards away and a first wild turkey was achieved.  Bucket list achievement fulfilled!

Once home, many YouTube videos were watched on dressing your turkey.  The easy way is to breast and leg the turkey.  We decided to go all out and keep the fan for a mount.  We plucked and prepped the rest just like a store bought bird.  I know fresh is best but it will be saved for a special occasion with family.
Written by:
Evan Wolski (Loving Husband) 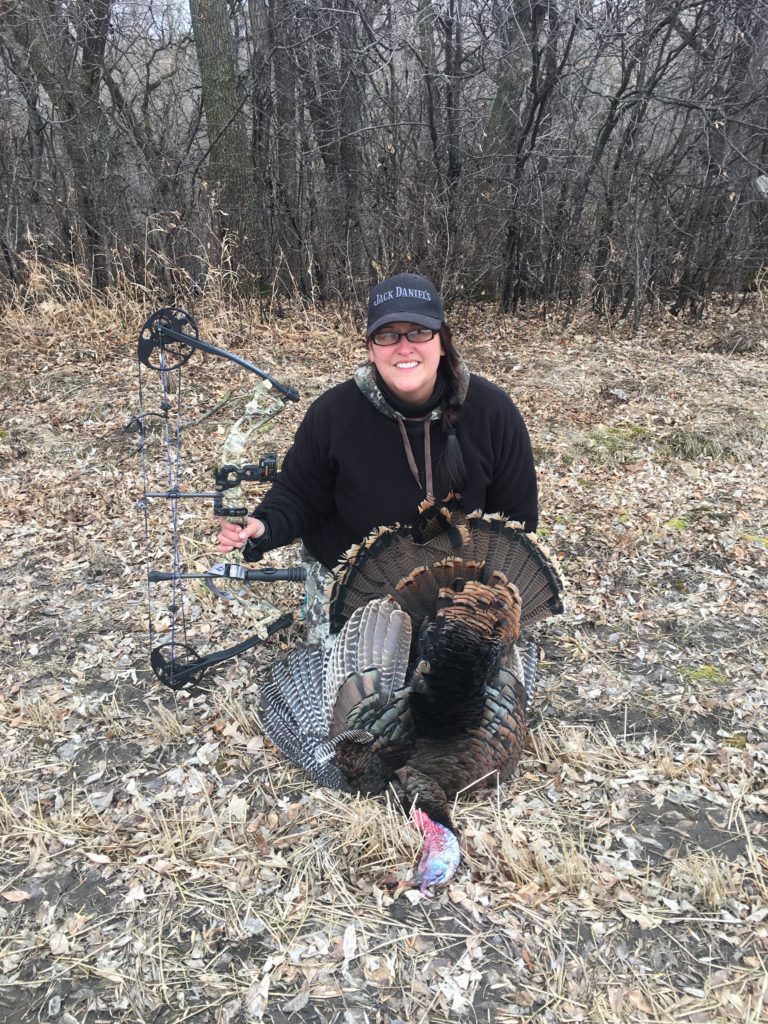 Jan. 21, 2017
Night Hunting too close to home?
In recent times we have seen more and more write ups regarding night hunting and the impact is getting closer and closer to home.  It cannot get any closer to Colin and Ann Hunter who live just four miles east of Rivers.  It seems that their farming business operation, The Farmers Field, sustained a serious blow.  One of their cattle who was just about to calve was shot in the head.  The Hunters host wild turkeys released by the association, open their farm to Open Farm Day, and provide local farm raised meat for sale.  They have a pretty strict no hunting policy on their land.  It is upsetting to see these kinds of actions happen considering it is on a no hunting private property, it was a farm animal, and there are adults and children living on same property.  If that bullet would have missed, then what?   The Manitoba Wildlife Federation and associated clubs take a firm stance on ridding the province of night hunting in populated areas.